Cleverly Solved | Is plastic or rubbish ok to burn in the fireplace?

10 Apr Is plastic or rubbish ok to burn in the fireplace? 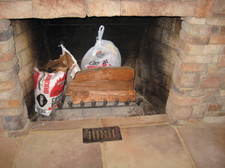 Q: Jason – My husband insists on using rubbish to start the fire in the fireplace, We are not just talking paper and cardboard, he will take a small plastic bag of garbage from the kitchen and put the logs on top of it and light it. I think it stinks and is dangerous, but he says “Well it is better than sending it to the landfill.” Please tell him that this is not a good thing to do. – GD

A: Dear GD, I make it a point to not get into the middle of spousal arguments but Im going to have to make an exception on this one. It is an absolutely terrible idea for your husband to use garbage to start the fire in the fireplace. Burning plastics create terrible caustic fumes that are harmful to people and their lungs. It may appear that all of the smoke and fumes are going up the chimney but you mentioned that the practice of using garbage to start a fire “stinks” and I am assuming you mean the smell of burning garbage stinks. The fact that you can smell it in the house tells me that you are getting fumes into the house. Furthermore there could be other items in the trash that he is burning that he didn’t know was there…chemical cleaner containers, paints, or other items that emit even more toxic fumes than plastic. From a chimney standpoint, the soot created from burning garbage can be very sticky and cause rapid buildup of creosote and other stinky deposits in the fireplace and chimney. This makes cleaning the chimney more difficult and sometimes more expensive. In short Mrs GD…your husband is being a meathead and he needs to stop burning his trash in the fireplace. (Note: In case your husband is a big fella, tell him I mean meathead in the most endearing kind of way.) It is time for him to use cardboard or paper shopping bags as this is the cleanest burning handy kindling he will find in the house that wont give him premature lung problems. – Jason