09 Feb How can I seal an old chimney if there are retrofit plumbing pipes running through it?

Posted at 16:00h in Chimney Plugs by blogediter
0 Likes
Share 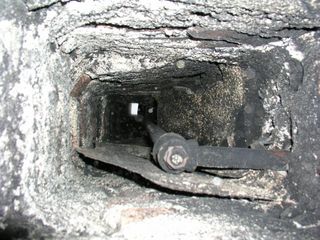 Q: Jason, I have a property built around 1900. It is a three-story building with a three-story shed behind it. The chimney is located on the back wall of the building. All of the sheds are not insulated but roughly 50% are.

The previous owner got some pipes installed in the chimney to provide water for washer outlets in the sheds. Needless to say, the pipes froze! Anyways…I wanted to know can I install a Chimney balloon on the top of the chimney to stop any drafts from coming in? Is it as effective as fiberglass? If it gets up to freezing temperatures is the Chimney Balloon still going to stay in place? Will it not change shape or wither up to -30 degrees (Celsius)? Thanks!

A: Dear OM, Ahhh, running pipes through an open chimney. That previous owner really set you up for a fall on that one. Since this is essentially an abandoned chimney you can install a Chimney Balloon at the top and it will help significantly as long as you have a spot to put the Chimney Balloon in that isn’t in the way of the pipes. From your measurements, it sounds like it would take a 15×15 Chimney Balloon.

The Chimney Balloon will not shrivel in the cold, but it will soften slightly. To minimize this I do recommend inflating it when the temp outside is cool (like late fall or winter) and you should inflate it with a pump, not by mouth. That way you will inflate it with cold air when the ambient air is cold as well.

I would advise checking it once a year in the fall just to top it off with air and make sure it didn’t shift. Also, make sure you install it at arm’s length into the top of the flue so the suns UV doesn’t reach it. UV will shorten the life of the membrane of the Chimney Balloon.

The Chimney Balloon will plug the chimney better than a fiberglass plug since the Chimney Balloon will insulate and air seal at the same time. Fiberglass is a great insulator, but it is not an air sealer, so if there are air currents (like in a drafty chimney) it will let cold right through. That is exactly why people call us all the time and say “I plugged my flue with fiberglass but it is still drafty…what is the deal?” – Jason