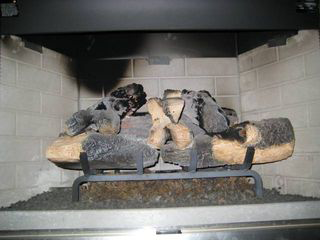 I could opt to put in vented gas logs since I am installing them in a wood fireplace that already has a chimney and flue, but the efficiency will not be there since most of the heat will go up the flue with a vented unit. What is your opinion? – RW

A: Dear RW, You have stumbled upon a debate that has raged in the hearth industry for decades. Before 1980 Vent-less gas logs were undeniably dangerous, but there have been improvements since then. Ventless gas log manufacturers swear by their newer products and say they are safe and do not elevate CO or CO2 levels. They say they even build in CO sensors that will shut the vent free heating device off if it malfunctions and causes a CO backup.

On the other side, you have the EPA and health professionals that say they have nothing but trouble with vent free gas logs since they introduce high levels of water vapor and generally decrease air quality in homes. They have not really been able to point to solid evidence of this, but rather just state it from experience.

The University of IL (Urbana/Champagne) recently introduced results of a study they conducted on 30 homes over a 3 years period to see how vent-free gas appliances do affect the homes air quality. The complete study is available online, but I will give you a brief summary of what I found most interesting about it since I saw a presentation on this study at the ACI show in Kansas City. It was presented by Paul F., one of the main researchers to the U of IL study.

Now we all know that Carbon Monoxide (CO) is not something we want in our homes but (NO2) Nitrogen Dioxide was new to me so I had to look up the side effects. Quite frankly, I found the side effects to be pretty scary.

The researcher that did this presentation was very impartial and factual in his presentation. However, at the Q&A session of the audience members put him on the spot and asked: “Would you personally install a vent free heating appliance in your home?” You could tell that this question made Paul nervous, but he answered truthfully and addressed the fact that the audience member was only asking his personal opinion and not anything related to the research (this was very wise to point out). His answer was “No, I would not.”