05 Dec Smoke Shelf trouble when the fireplace is first started. 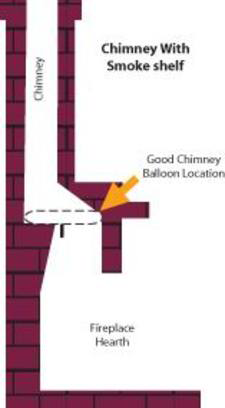 Q: Jason, Recently getting my chimney swept, I was given an estimate of 1k to replace my disintegrated Smoke Shelf. The guy was nice and said that is why I sometimes may get smoke in the room (I do — but only initially and it goes away in less than 20 seconds). But, on his estimate, he noted that the chimney could be brought “into” code with said Smoke Shelf. Getting back to this Smoke Shelf, it is above the damper, and if it looks like the diagram shown, how on Earth could it be disintegrated? One thing the sweep did not mention was my crusty damper that actuates open funny- NG

A: NG, 20 seconds of smoke at the start is quite normal. I wouldn’t worry about that, but if it bothers you then glass doors will work to cut that smoke escape way back. Since the damper is actuating funny you would be looking at a Chimney Balloon ($50) or a replacement damper ($500 or so installed) to fix that issue. Repairing your smoke shelf will not help this issue much at all. If the condition of the inside of the smoke shelf of the chimney is in question, then the whole interior of the chimney would be in question, so you would really be looking more at a stainless chimney liner. But that would be up to a sweep that has a camera to inspect it well. Or you could just plug it and forget it, since traditional fireplaces are such a losing heat energy option anyway. Using them makes your energy bill go up – not down. – Jason